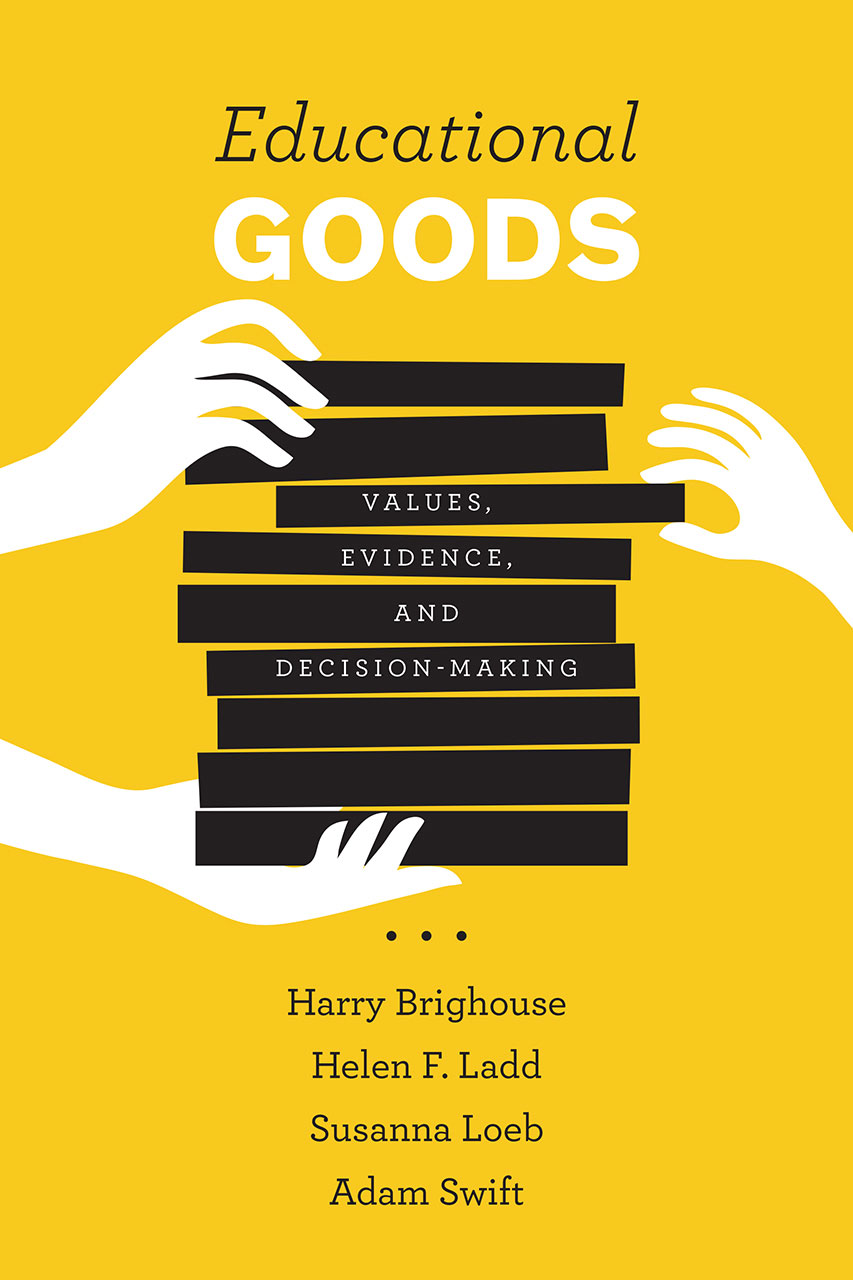 This is a brief summary of the book Educational Goods: Values, Evidence, and Decision‐Making by Harry Brighouse, Helen F. Ladd, Susanna Loeb and Adam Swift. It provides the introduction to the present symposium on this book, which includes the ensuing contributions from Carey Bagelman, Randall Curren, Michael Hand, John Tillson and Winston Thompson, followed by a response from the authors.

Educational decision‐making involves value judgments. As decision makers aim for improvements, they need standards that tell them what counts as an improvement. However, they typically lack a rich and sophisticated language for talking about values and articulating trade‐offs. The book aims to enrich the language available to, and to clarify the thinking of, both educational decision makers and the researchers whose work informs their deliberation, by offering a systematic framework for thinking about the goals of education.

We have coined the term ‘educational goods’ to refer to the knowledge, skills, attitudes and dispositions that children develop both for their benefit and for the benefit of others. We identify, at a general level, six capacities that will tend to support the flourishing of both the agent herself and others in her society: the capacities for economic productivity, personal autonomy, democratic competence, healthy personal relations, regarding others as moral equals, and personal fulfilment. We think of these as the distinctive goods that education aims to produce.

The level and distribution of educational goods are not the only normative considerations at stake in educational decisions. Other values bear on those decisions. First among these, and perhaps particularly salient to educators, are what we term ‘childhood goods’: the features of the child's daily experience that matter independently of their contribution to the development of educational goods. We also identify four additional values (or kinds of value) that regularly come into play in education decisions: respect for the democratic process, parents’ interests, freedom of residential and occupational choice, and the consumption of other goods such as housing, food or entertainment.

Values are often in tension. Explicit and careful consideration of these tensions can lead to better policy decisions. Policy makers are sometimes reluctant to discuss trade‐offs because they want to avoid talking about the negative aspects of policy choices. For example, in many countries, both researchers and politicians have focussed heavily on student achievement—as measured by performance in tests—and its distribution. A focus on such outcomes may come at the cost of other goals such as students’ capacity for autonomy, or their disposition to treat others as moral equals. Despite political pressures to obscure trade‐offs, good policy making requires awareness of how decisions are likely to affect the full range of values at stake. By offering an explicit and extensive, but manageable, list of those values, we hope ultimately to improve the quality of policy decisions.

Although our approach focusses on the promotion and distribution of opportunities for flourishing, it could readily be supplemented by non‐consequentialist considerations. Some educational goods (e.g. the capacity for personal autonomy) may be important for meeting moral claims that matter independently of flourishing, and some of those claims may act as constraints on the pursuit of flourishing and its valuable distribution. Furthermore, some of the independent values that can reasonably be balanced against educational goods and the distributive values may be important independently of their contribution to flourishing. The most obvious example here is respect for democratic processes, which some regard as owed to people in virtue of their moral status as citizens, not because it makes their lives go better or contributes to their flourishing. Some think that the current policy environment overemphasises some educational goods at the expense of others, or fails to meet distributive desiderata, or fails to give proper weight to other values such as childhood goods. We offer them a way of formulating their concerns.

The second half of the book illustrates how the framework can usefully inform decision‐making by applying it to three policy areas: school finance, school accountability and school autonomy and parental choice. We propose a four‐step process for making decisions that explicitly combines values and evidence. First, identify the values in play. Which valuable outcomes is the policy maker trying to achieve? What values may conflict with their achievement? Second, identify the key decisions relevant to those values. This obviously takes contextual work: it involves figuring out what the feasible options are and which among them might have some prospect of furthering the values that actually matter. Third, evaluate the options in the light of the pertinent values. The values guide the search for evidence, and the evidence makes possible the evaluation of the options. Finally, the decision maker chooses the option with the best expected overall outcome. This fourth step is rarely easy because it will usually involve trade‐offs and incomplete information on the consequences of the different choices. To arrive at the best option, she has to weigh the values at stake, and we offer no guidance for weighing values. What we do is explain what the values are that should be weighed.

We hope to influence the educational research community as well as decision makers. Consciously or unconsciously, educational researchers are usually motivated by value concerns, however vague or diffuse. Our framework offers a way of sharpening those concerns and a vocabulary for expressing them. Existing research findings can be interpreted and framed in the terms presented here. Moreover, once clear on the range of values at stake, researchers will be better able to focus their efforts on achieving those findings most useful for decision makers.

There is, rightly, much talk of the need for evidence‐based policy. But as well as relying on relevant evidence, policy makers must also think clearly about what it is their policies are trying to achieve. Policy should be data‐informed but values‐driven.